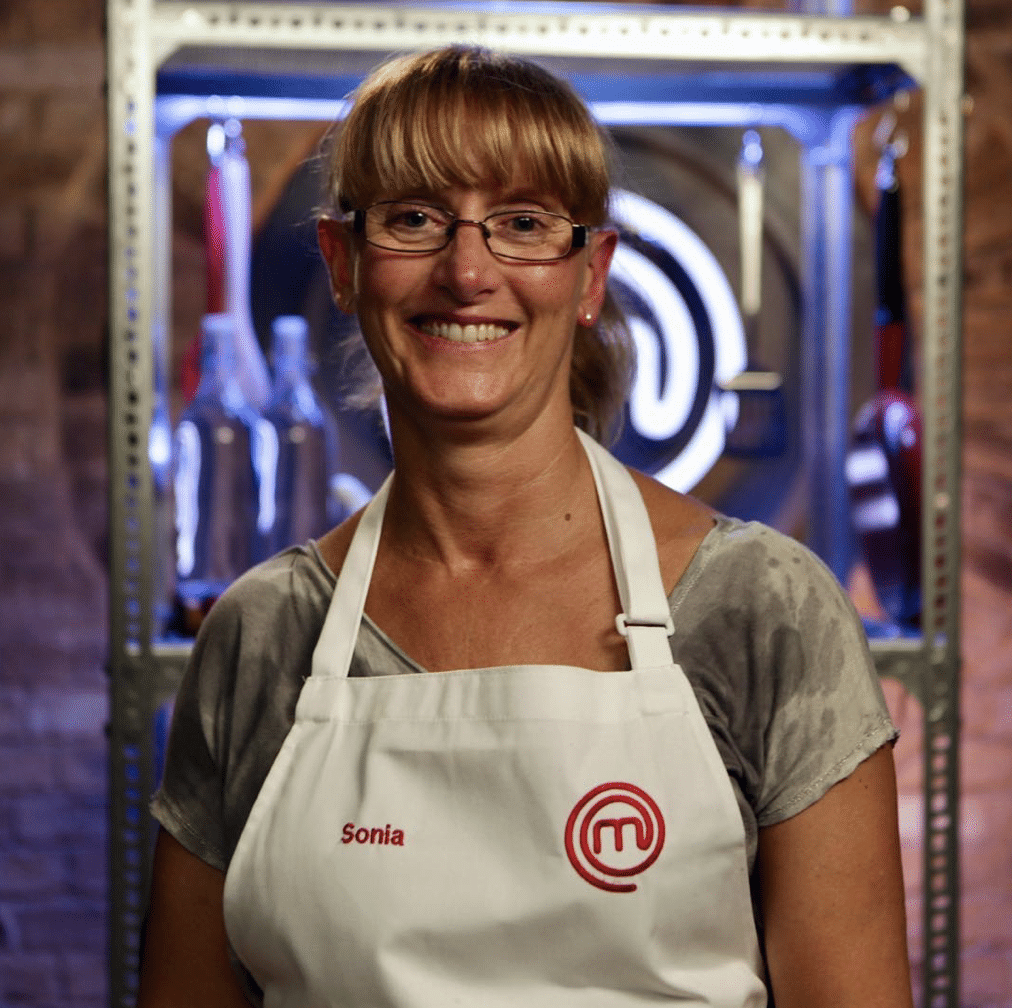 This year, Sonia Duthie takes on MasterChef cooking and competing through a variety of heats, quarter finals and knockouts until the ultimate winner is crowned. Gregg Wallace and John Torode judge the dishes being served – with all the action, tantrums, successes and burning disasters caught on camera. The winner goes away with a trophy and the prestige of being The MasterChef of the series.

Sonia has been married for 29 years and, apart from cooking, she enjoys travelling, fitness, love’s a challenge and trying out new experiences.  She would describe herself as “young at heart”.  Last year whilst on holiday Sonia completed the PADI Open Water Diving certificate as she had always wanted to learn to dive and was also part of a World Record achievement at CarFest North during July 2019 where they had formed the largest human Fleur de Lis in celebration of 100 years of the Scouting movement!

With a varied career, Sonia wanted to go to catering college. She was very successful at school in the Nutrition and Cookery lessons, coming top of the year for several years running. However, was not allowed to pursue this dream as, “girls weren’t chefs, different times back then”

“I absolutely love my role in the NHS, especially working at Bedford Hospital.  We are like one enormous family, everyone is so supportive and friendly and now, instead of dreading work, I now look forward to going and leave everyday knowing that I have made a difference to someone, even if it’s only in a small way like making them a cup of tea or holding their hand.”

What was the reason in taking part in MasterChef ?

I have been cooking since I was a small child when my Mum used to get me to help her in the kitchen at home.  My Mum also loved watching MasterChef.  Last year I lost my Mum and, after a few difficult months I had a bit of an Epiphany. My Mum always taught me to never give up and to embrace life so, for the third time I applied to be a contestant and this time I got through!

It’s a bit of a cliché but I have watched MasterChef from when it first started back in 1990 and, to be honest was a bit of a “sofa critic”.  I often wondered how I would do and always said I just wanted to see if I could actually manage the “Invention Test” or as it is now The Market Challenge”.  I can honestly say I will NEVER again shout at the television in judgement of others from the safety of my sofa.

Often at home I am invent dishes from the ingredients we have at hand, so I just wanted to know if my food was actually any good and to have a professional opinion, as my family and friends always praise my food.  My husband is a good critic and he’ll soon let me know if a dish is below his exacting standards, which is a good thing because that’s the only way I’ll improve.  I am very self-critical and have high standards myself, so it’s good to have an honest opinion.

I viewed MasterChef as an amazing learning opportunity, and welcomed the judges criticism as, no matter what, it would only serve to help me improve and get better at what I love doing.

I was not phased by the judges at all, perhaps because I am used to managing difficult and sensitive situations at work, or perhaps because I treat everyone I meet equally, in a friendly way or, just because as I watch every single episode of MasterChef and MasterChef the Professionals and it just seemed as if the judges were somehow familiar to me.

When I got into the kitchen my approach was; head down and cook!

While I was cooking I was oblivious to everything around me, to the point that when Greg first came up to me to chat, I didn’t even notice he was there and the camera man had to prompt me and Greg had to ask me his question again!

The other contestants, many of whom I now consider to be good friends were all incredible.  We were complete strangers, all with a common love of food and cooking, put into an intense and highly emotive environment.  This resulted in us very quickly forming strong bonds and we were all extremely supportive of each other.  In fact I got quite upset when one of the contestants got some harsh criticism as I had been encouraging and supporting him the whole day and I really felt for him.

I always think I am not that imaginative or creative.

However when I think about it, I adapt and create meals to be low FODMAP friendly as a member of my family follows this regime for medical reasons, and I rarely follow a recipe.  I also take inspiration from cookery books and from eating out and then recreate dishes at home, so in a way, I suppose I must be a bit creative.

I see my style as classic, traditional but with a twist.  I love to travel and learn about different cultures’ regional recipes and then recreate them at home with my own special touches.  I love cooking homely, comforting, generous and crowd-pleasing food, which brings people together.

You can expect flavour, love and passion from my food.  Oh yes, and a generous portion!

What is your greatest accomplishment during your time on MasterChef so far?

My greatest accomplishment was to get to the quarterfinals and for Jane Devonshire, Larkin Cen and Jack Lucas to say that, for the guest diners’ round, my dishes, despite “not being the cleverest, were the best two dishes of the day in terms of flavour” and for Jane to also say she could “feel the love in my food”.  To have such wonderful comments, and to hear that people who don’t even know me could tell just from eating my food how much I love cooking, meant the World to me and that is better than any trophy.

Has there been any downsides?

Would there be anything you would change so far and would you recommend to a friend?

If I had my time again, I wouldn’t be on away on holiday in the Caribbean just before the competition!  I got the brief to cook for the food critic while I was on holiday, so had no opportunity to practise my dish and had to come up with a pasta dish that showed “flair, originality and imagination” whilst sitting on the beach! Having said that, watching the sea during a tropical storm did inspire me to cook a seafood dish.

I would recommend to anyone who loves cooking to apply for MasterChef UK.

Being a contestant on MasterChef UK is a once in a lifetime opportunity and an amazing experience.  It is also a real door opener from a career point of view if you want it to be.  You make some wonderful friends, have lots of fun, get to cook with wonderful ingredients and learn so much about yourself, others, food and cooking.

To be one of the 56 contestants of MasterChef UK 2019, out of the thousands who applied is a real privilege and an experience I will always remember with a big smile on my face!