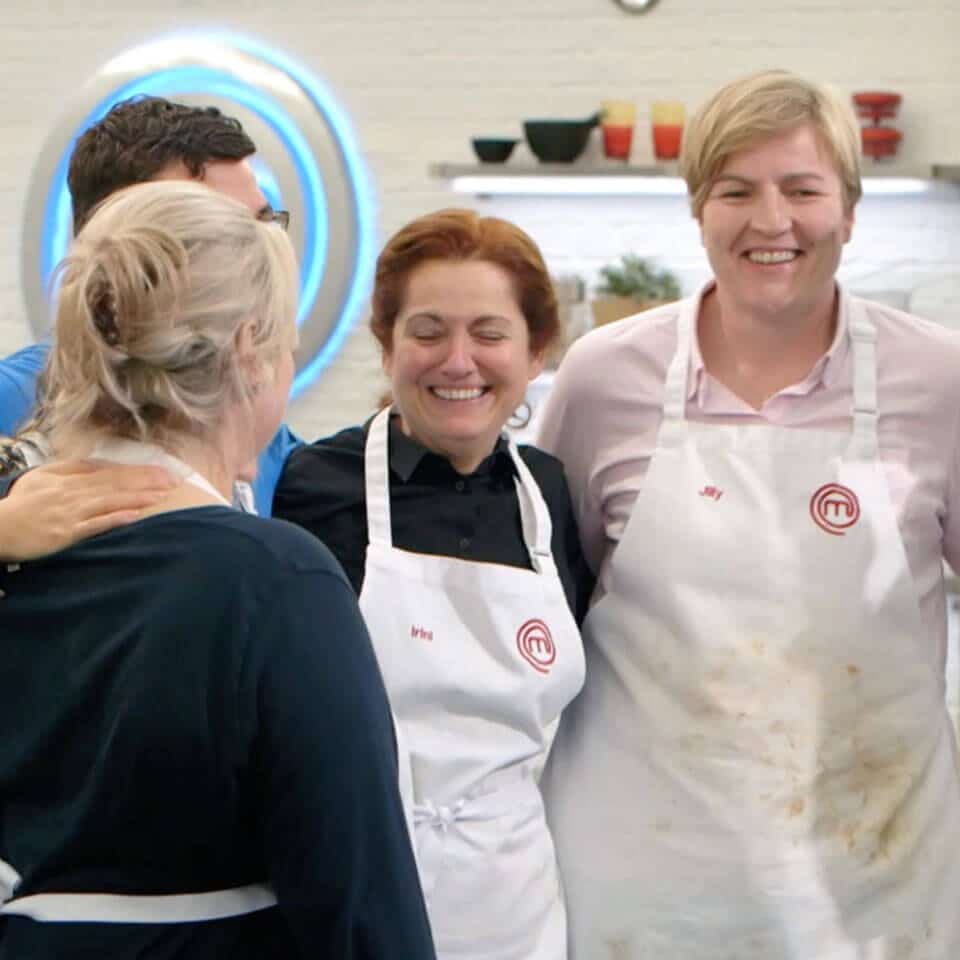 The eight remaining contestants are challenged to create a dish inspired by someone they admire. After this challenge another cook will be leaving.

Delia believes life is all about laughing and that’s her inspiration behind her dish.

Gregg wished for a ‘little more seasoning in the bonbon’, but this was his only complaint in a very ‘accomplished‘ plate of food.

John agreed with Gregg and said this was Delia’s ‘most accomplished dish so far in the competition‘.

Tim loves to use unique ingredients.

Gregg was disappointed in the plating of the dish and was confused with the flavours.

John suggested if the cook is to go ‘spars‘ with the food, he needs to blow the judges away with flavour.

Panisha was obsessed with the spice girls girl power and be using this to inspire her dish.

Gregg loved the Union Jack design and the combination of flavours but was disappointed in the panna cotta, being a centre piece, it needed to be firmer.

John was upset he didn’t receive the five spices that were promised.

Alex has tried her best throughout the competition and won’t let her ambition fail her.

Gregg thought the presentation was ‘very clever‘ and was ‘so very impressed‘.

John thought it was ‘boom, boom, boom and boom‘ and asked for another one.

Thomas is inspired by the royal family and British food.

John was worried for Thomas’s dish so far in the competition but thought the sausages were’ very clever‘, unfortunately didn’t think the venison burgers worked.

Gregg’s venison burger was ‘too rare‘ form him, however he really liked the the celeriac puree and whiskey sauce.

Irini has been inspired by famous painters.

John thought her work was ‘interesting‘ and ‘extraordinary‘.

Gregg was impressed with her ‘great, great work‘.

Geoff uses cooking as a meditation and has found the competition very pressured.

John enjoyed the way Geoff had presented the walnuts and found the ice-cream ‘majestic‘.

Gregg was very happy with the texture and flavour from all the desserts, calling it ‘lovely work‘.

Jilly is inspired by Andy Murray.

John was happy with the cooking of the beef, fondant turnip and carrots and but found the sauce was a little ‘too sweet‘.

Gregg wished for ‘more sauce‘, but apart from that the dish was very well executed.

Gregg, and John both agreed that the 6 chefs going through to the next stage would be; Irini, Geoff, Jilly, Alex, Thomas & Delia.
Unfortunately saying bye and good luck for the future to Tim & Panisha.

The remaining amateur chefs move on to a daunting challenge of cooking a three-course lunch at Grocers Hall for VIP diners.

Psychologist Geoff and stone cutter Thomas are in charge of the mains.

Teacher Jilly and retired banker Irini are in charge of desserts.

It’s now back to the MasterChef for the last challenge of the semi-finals. To cook an outstanding dish to win over five of the country’s feared critics – Tracey MacLeod, Grace Dent, William Sitwell, Amol Rajan and Jimi Famurewa.

Tracey loved the ‘neutral‘ cauliflower puree against the scotch egg which was ‘nicely made‘.

William wished there was 6 of the scotch eggs.

Amol loved the duck breast and thought it was ‘succulent and sweet‘.

Grave was very surprised with the hot hummus and ate it all up.

Jimi could mentioned that Irini’s dish showed ‘ideas and boldness of a really good cook‘.

Tracey described the dish as a ‘love song too sweet cicely‘.

Grace found ‘so much perfection’ in the dish.

William thought it was an ‘absolute triumph‘.

Grace was upset with how ‘stiff‘ the mousse was inside the sponge.

Amol thought the mousse and sorbet ‘lacked flavour and texture‘.

Jimi could see Alex struggled to get everything ready, but enjoyed the flavours.

William thought the venison was ‘perfectly cooked and well rested‘.

Amol mentioned it was the ‘best venison dish‘ he had ever eaten.

Grace suggested if she ‘won the lottery, she would make Jilly her private chef‘.

Even though the soufflé looked perfect, unfortunately to Grace the flavour lacked and thought it was just a ‘sweet and soft soufflé‘.

Jimi enjoyed the doughnut, and even though the ice-cream hadn’t set he found it ‘very nice‘.

William thought the malt flavour overpowered any banana that was meant to come through, however took his ‘hat off to her as she produced 5 perfectly risen soufflé’s‘.

Gregg, and John both agreed that the 5 chefs going through to the next stage would be; Irini, Geoff, Jilly,  Thomas & Delia.
Unfortunately saying bye and good luck for the future to Alex.