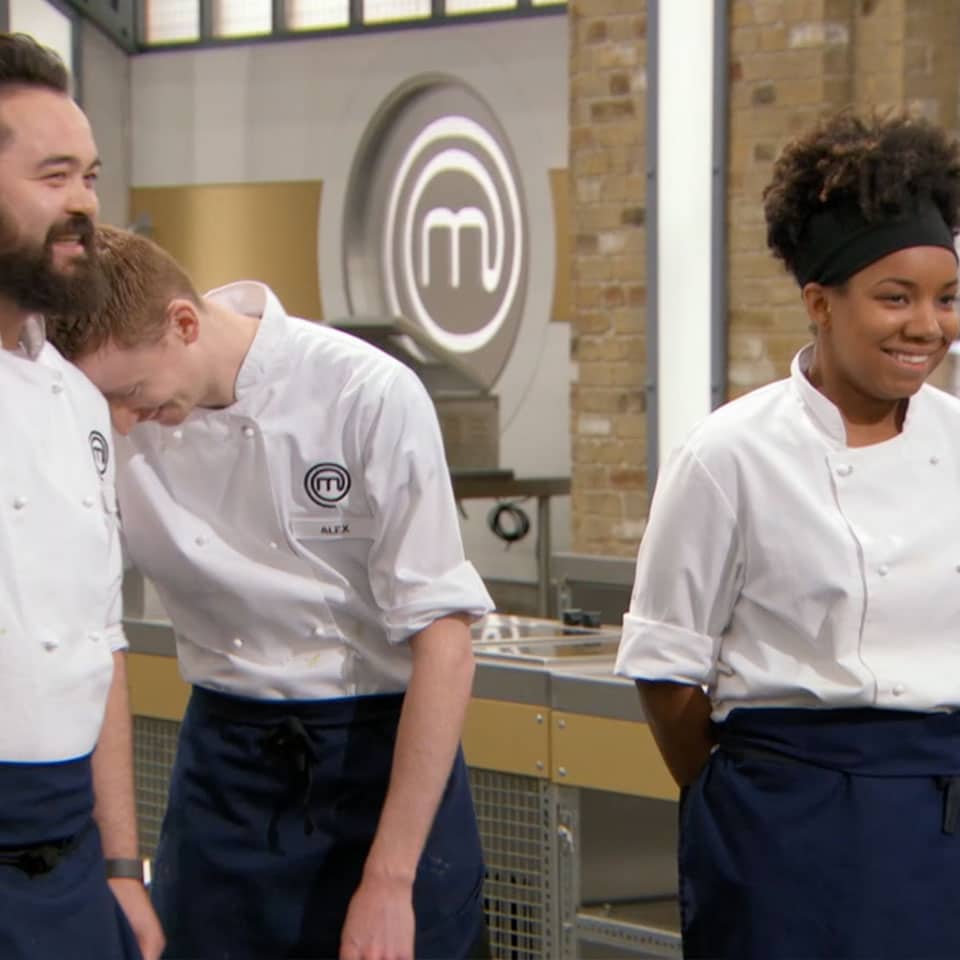 We have hit the first quarter final, and the six strongest chefs from this week’s heats use their knowledge and experience to impress the judges in two fast-paced challenges. Firstly the chefs face a brand new challenge to ever show on Masterchef: The Professionals – the judges’ ‘Favourite Ingredient Test’. The chefs are challenged to invent a dish purely based around one key ingredient chosen by the judges. Only four of the strongest very talented chefs will head on to the next heat and to cook for the  UK’s most discerning restaurants critics. Having to impress William Sitwell, Tracey Macleod, and Grace Dent. For 2 chefs it’s unfortunately the end of their Masterchef journey.

Week One – Monica has selected coconut, which is ‘an all time favourite’ of hers, putting pressure on the six chefs to use the ingredient as best as they can in their cooking. A range of other ingredients will be offered to the chefs to create and deliver a dish that they believe is unique to them, highlights on the versatile flavour of coconut and keeping the flavours well balanced throughout. With only 70 minutes to cook their dish and 10 minutes to plan their dish and choose their additional ingredients, a selection of fish, chicken, fruit, vegetables and herbs & spices. The pressure is high to go forth onto the next challenge.

Michelle has 14 years experience and embraces all her challenges.

Marcus is looking for the ‘wonderful wobble’ that the panna cotta is known for, and Monica knows that the combination of coconut, rum and pineapple work very well together but also is concerned that this dish is very ‘familiar’.

Michelle went on to explain that the panna cotta didn’t go to plan, therefore she had to rush to make another one. She also decided to add the cake for more dimensions.

Marcus was really looking forward to Michelle’s panna cotta, but unfortunately was too ‘hard‘ for wareing’s liking and went on to say that it was a ‘shame’ that he hadn’t gone to plan for the chef.

Monica could taste a ‘light coconut’ flavour coming through the panna cotta, but unfortunately the minted pineapple is overpowering the entire dish. Galetti was ‘really disappointed’ for Michelle as she had all the elements for a very successful dessert, that failed.

Marika recovered from a shaky skills test to win her place in the quarter final.

Monica doesn’t want the ‘coconut to get lost’ and overpowered by the chicken, while Marcus hopes the sweet potato fondant isn’t overcooked and ‘becomes mushy‘ as this may ruin the dish.

Monica enjoyed Marika’s dish, saying ‘the sweetness in the potato with the spices are things that work beautifully’, but unfortunately the coconut was lost throughout the dish.

Marika had gone at the challenge at ‘1,00 miles an hour with excitement’ which Marcus knew was ‘great’, but didn’t focus on the main elements of the challenge, which was ‘good cookery and tasting of coconut’.

Andre impressed the judges in the heat with his barbecue flavoured pork dish, and plays to his strengths.

Marcus is very interested in Andre’s ideas as their is a lot of ‘coconut flavour running through the dish’. Monica is expecting something ‘knock out’ following from the heat challenges.

Monica enjoyed the ‘sweetness from the coconut and pineapple’ coming through the dish, but was concerned that the key component to Andre’s dish was ‘undercooked’.

Marcus really enjoyed the idea of what Andre was trying to portray but said it was a ‘shame’ that his pearl barley was ‘undercooked’ and that he couldn’t taste the coconut in his dish, ‘where’s coconut in this dish? I have no idea’

Luke is very well known for cooking food influenced by his Chinese heritage.

Monica can see that Luke is ‘over the moon’ with the coconut challenge, but is concerned that too many techniques can confuse the dish. Marcus on the other hand is enthusiastic in his cooking style and the way he is imparting the coconut, by infusing his ingredients.

Marcus was blown away by the ‘sensational sauce’, having great flavour, texture and executing the coconut challenge, with every element imparting coconut flavour. Marcus went on to say ‘A very good plate of food of food Luke, and I’m very pleased for you’.

Monica could see and taste that Luke had ‘really pushed himself to use the coconut as much as possible’, and was very pleased with his efforts.

Callum has experienced working in Michelin-Starred restaurants around Europe and jersey.

Monica believes the ‘pollock will be great for poaching’ and will soak up the coconut flavour very well, where Marcus is struggling to see any flavour of coconut in Callum’s dish.

Monica was very pleased with the cooking of fishing and said it was ‘spot on and delicate’. Unfortunately Monica could only taste a light flavouring of coconut and wasn’t happy with his spilt sauce.

Callum is portraying delicate ideas, but Marcus doesn’t believe they are coming through into his dish, and said ‘its a good dish, but had the potential of being a fantastic dish’.

Alex shocked the judges with his almost perfect pigeon dish in his heat, setting the bar very high himself.

The elements Alex has chosen are all ‘very soft ingredients’ and Marcus is worried for that this will not make a dessert. Monica hopes there is ‘enough use of the coconut to bring the dish together’.

Monica could tell by Alex’s expression that he wasn’t happy with his dish. She went on to say ‘the presentation looks unfinished and doesn’t like a complete dessert to me’.

Marcus knew the dish had a ‘great idea to it’, but he thought the textures was missing a ‘biscuit‘, he was also disappointed with ‘the flavour of the day’ being passionfruit and not coconut.

Marcus and Monica all agreed that the 4 chefs going through to the critics restaurant would be; Michelle, Alex, Callum and Luke.
Unfortunately saying bye and good luck for the future to Marika and Andre.

The four remaining professional chefs will go on to cook their food for the UK’s most discerning restaurant critics. They need to impress the likes of William Sitwell, Tracey MacLeod, and Grace Dent. They will be judged on their knowledge, skills, talent and creativity. The chefs are given one hour and 15 minutes to showcase their culinary talent with a two menu course designed by themselves to win over the critics and judges. Only 3 out of the 4 chefs will go through to knockout week and continue in their journey for the crown.

Michelle has a Caribbean heritage and wants to show her love for spices.

Marcus looks forward to her lamb dish, but for the two-michelin-starred chef, mango is the perfect companion. Monica is looking forward to Michelle dish and thinks ‘they are all in for a good dish’.

Main: Caribbean curry spiced loin of lamb with a sweet potato and ginger puree, cauliflower and a mango and lime salsa.

Tracey enjoyed the ‘curry dried rub’ on the lamb and couldn’t get enough of the ‘gorgeous’ sweet potato and ginger puree.

William didn’t seem too keen on Michelle’s lamb, saying that it was cooked ‘ok’.

Grace disagreed with everything William said, and loved everything Michelle had produced.

Tracey loved the ‘combination of chocolate and cardamom‘, with a ‘gorgeous and crunchy’ crumb underneath.

Grace wanted more ‘ginger heat’ in the tuile and more dark intensity in the slice, but ‘enjoyed’ the dish overall

William enjoyed the extra ‘dark intensity’ in in chocolate bites, but couldn’t fault that it was a ‘great pudding’.

Luke has chosen these dishes to get ‘heavy hitting flavour’ on the plate, to impress the judges.

Marcus like the idea of the asian touch Luke is bringing to the kitchen, but knows that ‘if its too sweet, you won’t taste all the other ingredients’. Monica hopes the citrus dressing doesn’t ‘overpower’ the scallops.

William was impressed with how well the scallops was cooked, ‘charred on the edge and beautifully tender on the inside’.

Tracey loved the ‘crunch’ from the puff rich, creating texture with ‘the soft scallops.

Grace loved the ‘delicate puree’ and ‘the delicate placed’ sea veg, which worked perfectly for her palette.

Tracey went on to explain all the different flavours and textures, how each element made their own statement while all working very well with one another.

Callum likes to choose one ingredient, and portray that key element in different forms.

Both the judges hope that there isn’t too much of ‘same flavour’, and hope he does bring in other ingredients ad a bit of a ‘surprise’.

Tracey thought that his ’50 shades of mooli’ is quite clever, as he has extracted a lot of different contrasting flavours out of each form.

William says that Callum’s dish is a ‘component piece of dining’ but ‘whilst ill remember the mooli, I won’t remember the dish’.

Grace was overpowered by the ‘citrus assertiveness’ of the panna cotta and wasn’t impressed by the ‘hard’ texture.

Tracey enjoyed the strawberries and strawberry gel, but thought Callum had over used the yuzu.

Alex is very passionate about takings risk, and the pressure from the critics isn’t stopping him in his 2 course meal.

Grace was a fan of the ‘mint and pea sauce’ and the ‘mint jelly’ but seemed unsure of the dish overall.

William was upset with the ‘tough’ lamb.

Tracey was also upset with the ‘chewy’ lamb.

William was over the moon with the ‘perfect soufflé, and said the cream cheese ice cream, ‘a piece of magic’ inside a hot soufflé, was simply ‘ingenious’.

The pudding made Grace ‘very happy’ and ‘flushed’.

Tracey loved the ‘tartness’ to the ice cream, and said it was ‘a really really nice pudding’.

The judges and critics all agreed that the 3 chefs going through to the knockout stage and be part of final 12 would be; Michelle, Alex and Luke.
Unfortunately saying bye and good luck for the future to Callum.