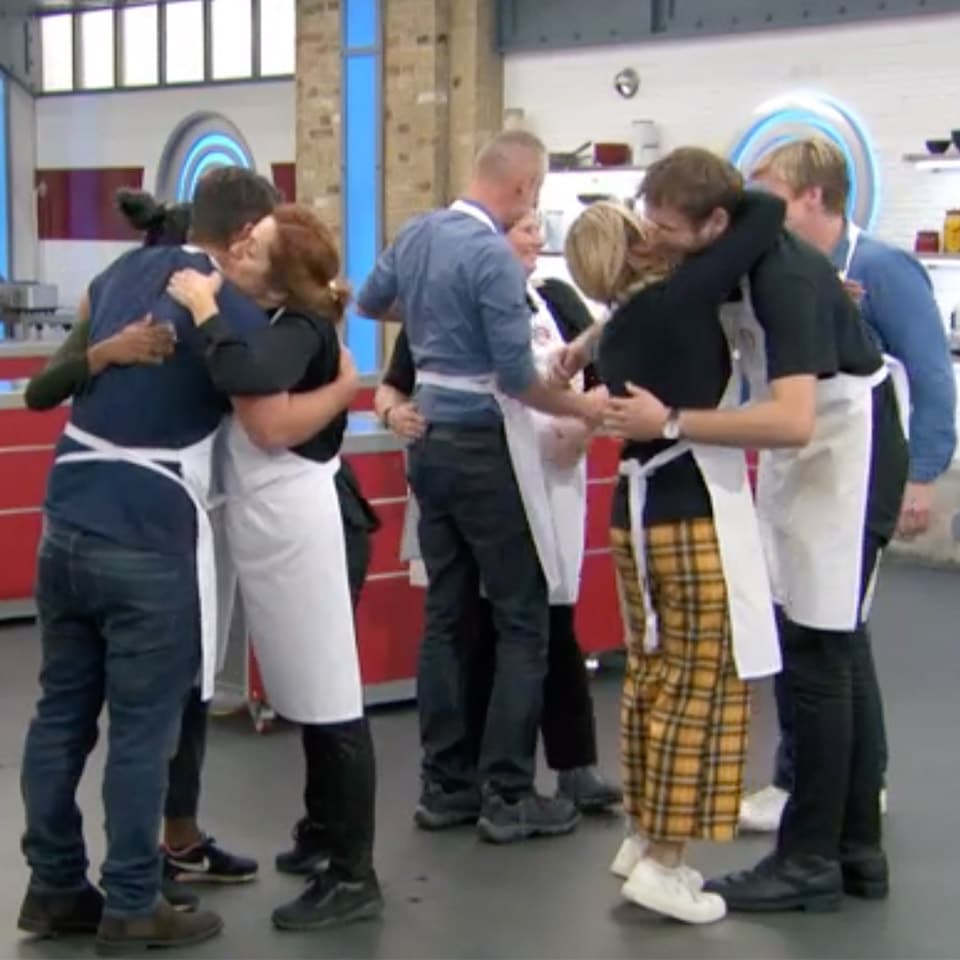 The nine chefs are spilt into three teams of three and face the challenge of mass-catering a fine-dining event at Glyndebourne in Sussex, one of the most celebrated opera houses in the world.

Each team will have to create a dish for a three-course menu to feed 80 guests consisting of opera singers, theatre directors, costume designers and members of the theatre company to celebrate the 25th anniversary of the opening of the new opera house.

Annabel, Alex and Thomas must create a dish using salmon as the main ingredient.

John found the mousse ‘grainy‘, but thought the diners would ‘appreciate the work‘.

The diners loved the avocado and goats cheese whip, although wouldn’t of called the dish a ‘celebration of beetroot‘.

Irini, Jilly and Tim must base the main dish around a saddle of lamb.

Gregg thought the presentation could off been ‘prettier‘ but the ‘flavours and texture were superb‘.

John was very ‘impressed‘ with the dish.

The diners thought the pastry was very well cooked.

Geoff, Panisha and Delia needs to produce a trio of desserts based around autumnal fruits.

Gregg thought it was a nice way to finish but wish they were more ‘elegant and sharper‘.

The nine contestants return to the MasterChef kitchen for an invention challenge. They must create a stunning dish from scraps and leftovers, including pigs’ ear and tails, cod head, scallop roe and salmon bones.

Signature Dish: Orange tart served with candied orange and mint leaves, a pistachio pesto, a walnut and ginger crumb and a chocolate sauce.

Gregg liked the cooks tart, but found everything else ‘a little too sweet‘.

There was some ‘technical issues‘ for John, but also the flavours were too much and he ‘didn’t enjoy it‘

Signature Dish: Trio of fish starters. Scallops served in its shell topped with béchamel sauce, parsley and breadcrumbs, a scallop and salmon ravioli and pan fried cod cheeks and capers on a roast cauliflower puree.

Gregg enjoyed the making of the ravioli, the cods cheek and found himself ‘reaching for a cold glass of white wine‘.

John thought it was ‘very, very good‘ and enjoyed every element on the plate.

Signature Dish: Orange and pumpkin bread and butter pudding, from the left-over croissants, with a pumpkin seed and pecan brittle, an orange and lemon bitter sauce with a chocolate ice-cream.

John enjoyed the dessert, even though it was nothing like a bread and butter pudding.

Gregg knew the cooks ice-cream wasn’t right, but the combination of flavours were ‘fantastic‘.

Gregg enjoyed the cooking of the scallops and the ‘sweetness‘ from cauliflower puree, but didn’t think the croquette worked in partnership with the scallop.

John agreed with Gregg saying the dish hadn’t become ‘as one‘.

Gregg found the dish nothing short than ‘absolutely delicious‘.

John praised the elements of the dish and said it was completely ‘splendid‘.

Signature Dish: Used the fish trimmings to make an asian, coconut and chilli fish broth, poached meat from the cods head, red pepper and coriander topped with crispy salmon skin and deep fried rice balls on the side.

Gregg liked the broth but didn’t see why the rice balls were added and wished to see more ‘endeavour’ from the cook.

John enjoyed the base flavours of the soup, but agreed with Gregg and wished to see another process.

Signature Dish: Salmon and scallop ravioli and a salmon veloute with an herb oil and toasted sunflower seeds.

John enjoyed the texture and flavours from the dish and said it was an ‘accomplished‘.

Gregg wouldn’t of known that the cooks dish came from an invention test of scraps, and praised the Thomas on his ‘good work‘.

Signature Dish: Raspberry and frangipan tart, served with a raspberry coulis and a chocolate and amaretti pot with whipped cream.

John was disappointed that a lot of the components came out of the market, however he really enjoyed everything within the dessert.

Gregg enjoyed the dessert, but agreed with John and believed the scraps were an ‘after thought‘ of the dish.

Signature Dish: Trio of desserts, an orange tart, a banoffee pie and a queen of puddings, berries and a bread crumb custard with a meringue topping.

Gregg was outstanded that the cooks dessert came from a bag of scraps and said he was ‘in love the trio of desserts‘.

John was ‘really impressed‘ while Gregg was still eating.

Gregg, and John both agreed that the 8 chefs going through to the next stage would be; Irini, Geoff, Jilly, Alex, Panisha, Thomas, Delia & Tim
Unfortunately saying bye and good luck for the future to An nabel.