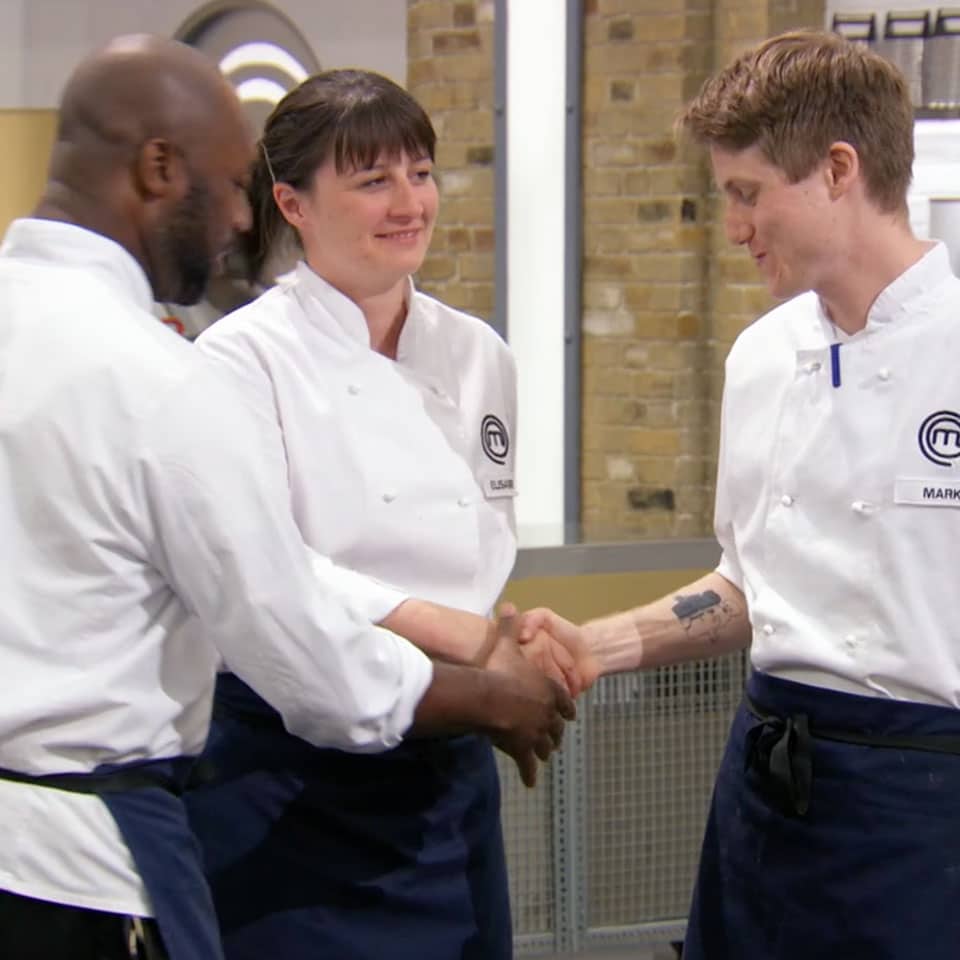 Week two of Masterchef: The Professionals, heats is over, and 48 contestants from around the country with a range of backgrounds have started to battle it out to be named the Culinary Professional Champion.

For the next 3 weeks, Tuesday’s and Wednesdays episodes will each have 6 contestants who will be competing and cooking through a variety of heats, quarter finals and knockouts until the ultimate winner is crowned. Who are then whittled down to 2 groups of 3 who will appear in the quarter finals on a Fridays episode.

In the first opening heat, each chef begins with the famous skills test. Under the watchful eye of all three judges, the first moments for any chef in this competition are crucial, as their knowledge, palate and experience are tested. The 3 chefs began to each cook monkfish with spicy tomato and roasted onion sauce. Marcus wants the chefs to display faultless filleting and depth of knowledge to show through when cooking with spices.

The remaining 3 chefs face Monica’s skills test. Challenging them to cook 2 very refined and delicate scotch eggs made with quails’ egg. The chefs only have 15 minutes to mince, boil and fry their way through the heats.

Lets meet and see how the chefs got on, in episode four…

Monica was concerned he wouldn’t get his tongue cooked it time, but was happily pleased for the outcome and said it was ‘lovely’. She then went on to praise him up further on his crispy tart, nicely cooked and seasoned lamb and all the strong flavour combinations.

Gregg couldn’t know the dish and described his touch as ‘perfect’. However, he had a slight ‘personal’ concern with the ‘artichoke and asparagus’ being too sharp and the sauce being ‘too sweet’.

Marcus agreed and also said ‘the sauce was a little too on the sweet side’, but he went to say, that when the sauce is mixed with all the rest of the ingredients, ‘it really does balance itself  out and work together in great harmony’. Wareing called Mark’s first dish in the competition, ‘absolutely brilliant’.

Monica described the pea puree and chorizo as ‘wonderful’. She didn’t mind the pineapple within the dish, but there was too much of it and destroying the ‘balance’, but admired that he was challenging the chefs

Gregg also wasn’t sure on the balance of pineapple with the scallops, but he did love the combination of pineapple and chorizo, ‘sweet sharpest going into paprika warmth, I think its lovely!’.

Marcus simply knew there was ‘too much fruit on the plate’, but praised Jake for his ‘great scallop cookery’.

‘I think that does it for me, I think the thing absolutely divine’ were Gregg’s words of happiness. He enjoyed every element of the dish, saying ‘the flavour combinations are tried and tested’.

Monica loved the lamb shoulder and croquettes, and thought it was ‘a nice addition’ to the plate. She was surprised with the ‘kick’ to the sauce but was very pleased with it.

There wasn’t a lot that Marcus didn’t like about Ian’s dish. He enjoyed the ‘charring of the lamb, the presentation, sauce and cookery’ and said it was ‘absolutely brilliant’.

The pigeon ‘melted’ in Gregg’s mouth and also liked the ‘bitter, pepperiness of the turnips‘ and ‘just loved’ the liver pate, and thought it was ‘a beautiful and really luxurious dish’.

Monica agreed and said ‘its just a wonderful plate of food’ and that all the flavours worked really well together, from the sharpness of the lingonberries to the sweetness of the sauce.

Marcus enjoyed the popcorn and pistachio elements, saying he could of ‘ate more of it’. Wareing went on to say that he loves when chefs add their own little modern twists to the plates, not knowing if they will work or not, ‘in this particular case, it worked’.

Unfortunately chef’s signature dish didn’t go to plan, with Jake burning most of his pork cheek, and running out of time to create his unique sauce. All the chefs admired his ‘fighting spirit’ to carry on with his dish, and praised him for his efforts, but Wallace was disappointed and knew it ‘wasn’t the dish it was meant to be’.

To what he had salvaged of the pork cheeks, they had ‘all the flavour’ Monica wanted, but there wasn’t enough to get that ‘beautiful stickiness’ they all really wanted.

Marcus praised the puree, and thought it had brought ‘wonderful tanginess and smoothness’ to the dish.

Richard, aged 35. Head chef of a beach-front restaurant in Newquay.

Monica liked the flavours coming through the sauce, ‘saffron and tomato’, but said the cockles were ‘dirty and gritty’ as they hadn’t been cleaned. Despite Richard challenging his flavours, Galetti went on to say, ‘Lemon curd in a bouillabaisse? yeah, that one you best leave alone’.

Marcus also wasn’t impressed with his flavours, ‘it feels like you’ve got a pot of lemon curd out the fridge, and stuck it inside a shell’, this dish wasn’t for him and believed ‘it should be on toast, not in a bouillabaisse’.

Gregg went onto explain the elements of the dish and simply stated, ‘mate, its not working for me at all, I’m really sorry’.

Gregg, Marcus and Monica all agreed that the 3 chefs going through to the quarter finals would be; Mark, Ian, Elisabeth.
Unfortunately saying bye and good luck for the future to Keelan, Jake & Richard.

Lets meet and see how the chefs got on, in episode Five…

The first 3 chefs have 15 minutes to produce perfect poached plaice with a beurre blanc sauce. The plaice must be precisely filleted from fish before the chef can begin cooking, set by Marcus.

The remaining 3 chefs face Monica’s skills test. Challenging them to a baked Alaska – the tip being to stop the ice cream interior from turning into a puddle while the baking of the meringue takes place.

Gregg loved the ‘soft and buttery sea bass’, and enjoyed the pickling of the cucumber as well as the orange sauce. He said the dish was absolutely ‘lovely’.

Although the salad seemed very simple to Monica, it actually had a lightness to it which is finished when you pour the sauce. ‘I think it’s very clever to make something so beautiful when it’s so simple’.

Mark, aged 27. Head chef at a traditional country pub in the Lake District.

Signature Dish: Sea trout three ways – pan-fried, beetroot-cured, and a tartare on a potato rosti, roasted golden beetroot, beetroot crisps and a candied beetroot with a beetroot and grapefruit coulis.

Marcus wasn’t keen on the presentation, ‘If I’d ordered this dish off the menu, I would look at it and the chef’s lost his marbles’. He couldn’t understand why anyone would put tartare on a rosti, ‘rosti is served hot and tartare is served cold, its one of the weirdest thing I’ve come across’ and for him it was overcooked, however his favourite part of the dish was the cooked beetroot.

Monica agreed with Marcus and was confused why cold and hot elements were put together, as they didn’t work.

Gregg wasn’t happy with the large overcooked salmon, and nothing to ‘accompany’ it, he also would of liked a sauce.

Tristan, aged 31. Head chef at a gastropub in south-eat London.

Signature Dish: Pan-roaster gurnard on a fennel, kohlrabi and samphire salad with razor clams, potato and ‘nduja – a spicy Italian sausage, with a squid ink and seaweed coral tile, served with a lemon butter sauce and a seaweed powder.

Gregg loved the presentation and said ‘its like a piece modern art’, and said it tasted great too.

Monica said the gurnard was cooked ‘wonderfully’, and liked the idea of the fresh salad that goes with it. But was disappointed by the buttery sauce, and said she ‘wasn’t enjoying it’.

Marcus agreed and said ‘the sauce is too sharp’, but loved his gurnard ‘beautifully crisp and very very well cooked and really enhanced the flavour’. He thought the razor clams, potato and sausage showcased ‘excellent cookery and a really great idea’.

Monica really enjoyed the mackerel, and the cooking was ‘spot on’. However, trying ‘rundown’ sauce for the first, she expected more ‘heat’ than was there.

Gregg couldn’t find any fault in David’s cookery, but he was just a ‘little underwhelmed’ by the dish.

Marcus praised up the sauce, for him ‘it was perfect’. He thought David ‘had the makings of a very good idea’, but hadn’t ‘taken it to a level, that could really blow your mind away’.

Gregg loved the elements of Wali’s dish, but doesn’t like them together. ‘I don’t want to be going into a rice ball one moment, and then ginger and fish the next moment’.

Marcus did find ‘good fish cookery, absolutely delicious arancini’ and enjoyed the sauce, even though there wasn’t one killer flavour in the meal.

‘A little butter sauce, the arancini and the fish’ was enough for Monica. She couldn’t taste the ginger, and said ‘there was a lot on this plate, and I don’t think it brought anything extra’.

Jacqueline, aged 30. Runs her own private catering business in Sussex.

Monica said the sauce was ‘too sharp and also too thick’. She also mentioned there was too many ingredients on the plate, and suggested she based future dishes around the ‘croquettes and beautiful vegetables’.

Gregg agreed that there ‘was far too much going on for the scallops’ and ‘loved’ the croquettes.

Gregg, Marcus and Monica all agreed that the 3 chefs going through to the quarter finals would be; Sean, Tristan & David.
Unfortunately saying bye and good luck for the future to Mark, Jacqueline & Wali.