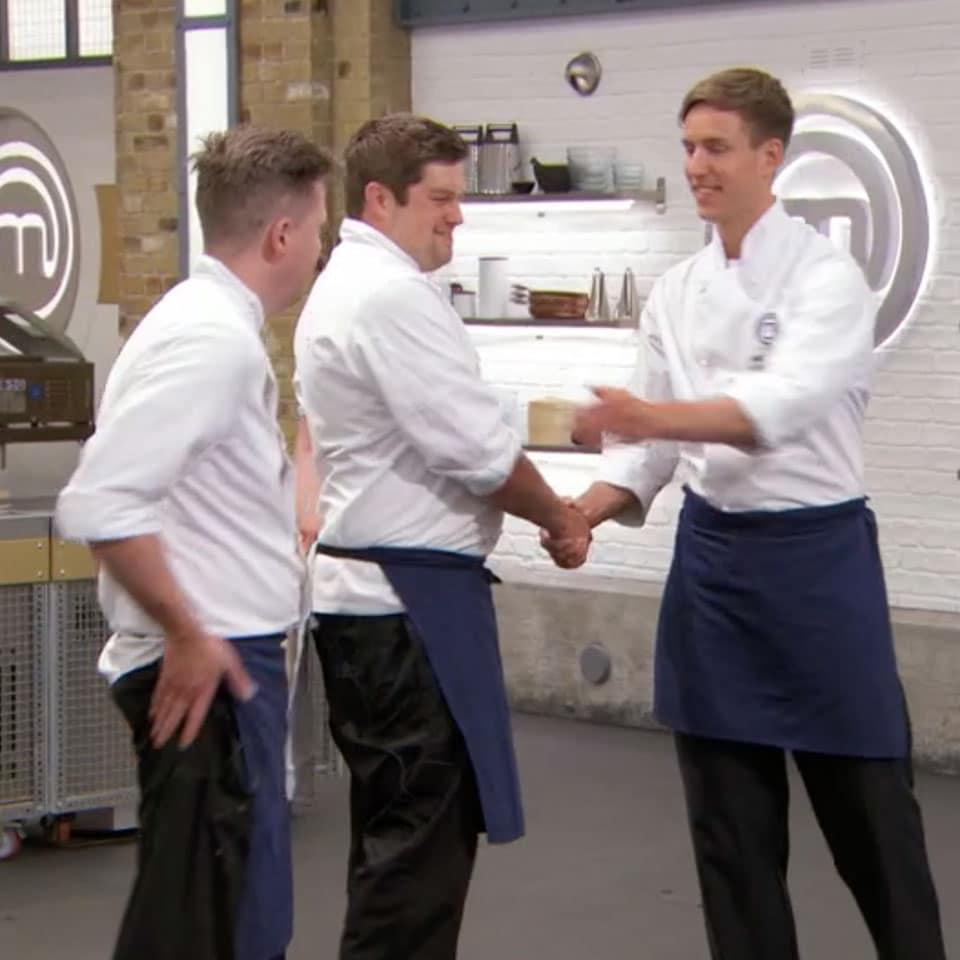 Week four of Masterchef: The Professionals, heats is over, and 48 contestants from around the country with a range of backgrounds have started to battle it out to be named the Culinary Professional Champion.

For the last episodes of the heats, 6 contestants will be competing and cooking through a variety of heats, quarter finals and knockouts until the ultimate winner is crowned. Who are then whittled down to 2 groups of 3 who will appear in the quarter finals on a Fridays episode.

In the first opening heat, each chef begins with the famous skills test. Under the watchful eye of all three judges, the first moments for any chef in this competition are crucial, as their knowledge, palate and experience are tested. The 3 chefs face a skills test from Marcus. The chefs will have 2o minutes to roll, form and fill pasta to make a dish of pork-filled ravioli with a chasseur sauce, creating depth and flavour.

The remaining 3 chefs face Monica’s skills test, who has chosen the famous oyster Rockefeller as her test. This buttery, herb-crusted, baked shellfish dish has been around in many forms for over a century, but will the chefs have the knack for it?

Lets meet and see how the chefs got on, in episode ten …

Max, aged 30. Chef patron of a bistro in Newcastle.

Monica was impressed with the cooking of the venison, but wished it was slightly richer, but overall it was a ‘nice‘ dish.

Gregg loved the ‘shaved heart‘ as it was ‘meaty‘ and ‘almost salty‘. He was ‘disappointed‘ that he could ‘smell‘ the smokiness but couldn’t taste it.

Marcus saw there was a lot of ‘skill in a dish like this‘, but agreed with Monica that the dish needed a much ‘richer‘ sauce with the venison and chefs sauce was a bit ‘too loose‘.

Tara, aged 24. Pastry chef at a hotel in the Lake District.

Monica isn’t a ‘Huge fan of saffron in custard‘, but liked the ‘control‘ Tara had shown. However chef thought the crumb was ‘too fine and too powdery‘.

‘Sweet and sharp rhubarb‘ is one of Gregg’s favourites, but didn’t believe it was the ‘smartest of dishes‘ and was disappointed with the lack of textures.

Marcus praised chef on her custard consistency, but wasn’t sure where the ‘mango‘ fit it within the dish as it was lost by the ‘big flavour‘ of the ‘saffron‘.

Matthew, aged 23. Head chef at a restaurant in Mayfair.

Signature Dish: Sea bread served with haricot beans in an oyster sauce with pancetta, compressed apple, samphire, and a tarragon mayonnaise, alongside a crispy oyster, and a yoghurt tartare sauce.

‘wow, what. precise and pretty plate‘ said Gregg who was overwhelmed with chefs presentation as well as the flavours within the dish, ‘its a beautiful combination of flavours‘.

Marcus said the dish showed ‘skill‘, ‘intelligent cookery‘ and was an ‘absolute delight‘ to eat.

Monica agreed very much with the other chefs, and went on to ‘rave‘ about it, ‘magic, well done you. Please keep it going‘.

Dave, aged 34. Head chef of a Cotswolds gastro-pub and hotel.

Marcus enjoyed the chicken, although thought the dish needed ‘sauce‘ to ‘bring it all together‘. He went on the say that the ‘star of the dish‘ was the ‘cauliflower‘ element.

Gregg ‘completely and utterly‘ agreed with Marcus and thought the chicken was ‘a bit dry‘ and needed some sauce.

Monica said their was some ‘nice things‘ on the plate, and was ‘hoping‘ for something to blow her away.

Signature Dish: Cuttlefish and scallops marinated in a beer vinegar ponzu dressing and served with pickled carrots, turnips and radish, with a carrot puree, dashi jelly and buttermilk gel.

The ‘smoky flavour‘ from the dashi jelly accompanied by the carrot puree and scallop, Gregg thought was simply ‘divine‘. But thought the ‘ferociousness‘ from the pickling is ‘overpowering’ the rest of the dish.

Monica was ‘super excited‘ by the food, but had a lot of negatives to say about the dish. ‘the cuttlefish was quite chewy and the pickling of the vegetables I found was so strong, I couldn’t taste anything underneath‘.

Marcus couldn’t of agreed more, and said ‘it was death by pickling‘ and couldn’t taste anything.

Will, aged 24. Sous-chef of a family run restaurant in Bedfordshire.

Marcus wasn’t particular happy with the elements on chefs plate, and went to say that the lamb was ‘nice‘ but was ‘just on the border on being more rare then pink‘.

Galetti enjoyed the flavours from the ‘wild garlic salsa verde‘, but said ‘everything is washed away by the lamb sauce which has no body or flavour to it‘.

All Gregg needs is a ‘sauce of depth and quality‘, for the dish to be ‘winning‘.

Gregg, Marcus and Monica all agreed that the 3 chefs going through to the quarter finals would be; Matthew, Max & Dave.
Unfortunately saying bye and good luck for the future to Ross, Tara & Will.

Lets meet and see how the chefs got on, in episode ten…

The first 3 chefs will take on Marcus’s dish of caramelised pineapple with caramel nut garnish.

The remaining 3 chefs are faced with chicken carcasses, which form the basis of the dish they have 15 minutes to cook, glazed chicken oysters with pomme puree.

Gregg was very happy with the scallops and ‘beautifully salty‘ seaweed, but was upset with the ‘cream‘ textured mousse.

Monica said she loved the taste of the ‘salt with the seaweed wrapped round it‘ she also liked the courgettes on top and said the ‘scallop was a nice touch‘. But was ‘really disappointed‘ that the fish hadn’t ‘cooked properly‘ and the ‘moose was runny‘.

Marcus said ‘everything was nicely done‘ but could see the fish is ‘just cooked‘, and was also upset the mousse hadn’t ‘quite worked‘.

Simon, aged 29. Sous-chef in a two-rosette restaurant in Newcastle.

Monica loved the look of the ‘scales on the fish‘, but unfortunately the cooking was ‘slightly under‘. Chef suggested to put some of the ‘sauce on the side‘, so they could ‘taste it‘.

Gregg loved the ‘serious saltiness‘ and ‘peppery finish‘ of the filling inside the courgette flower, and said that personally he would ‘send the fish back‘

Marcus ‘enjoyed’ the ‘flavour of the sauce‘ and ‘the dill oil on the plate‘. He went to say ‘if you hadn’t undercooked the fish and had a lot more sauce on the plate, for me the dish would have been a winner‘.

Susan, aged 42. Wonder and head chef of a gastropub in Wales.

Monica loved the cookery of the hake, and said the beignets were a ‘delight‘, but was confused why she would eat them with leeks as they were ‘undercooked‘.

Marcus found the dish very hard to eat, and said personally he would eat all his fish, but’ leave a good 2/3 of the garnish on the side‘.

Gregg ‘loved‘ the beignets and the cooking of the hake, but as tits not a ‘big flavoured fish‘ wished for the ‘bisque to a lot stronger’.

The balance of flavours worked ‘really well‘ for Gregg, but had one issue with the crispiness of the duck breast skin, and therefore didn’t want to eat it.

Monica wasn’t happy with the ‘sweet‘ beetroot and ‘sickly‘ sauce flavour combination, but enjoyed the cooking of the duck breast.

Marcus suggested the duck to be ‘cooked on the bone‘, and said ‘the dish could be cooked a lot better with more attention to detail‘.

Signature Dish: Char-grilled hot pepper mackerel with a horseradish cream and a port and beetroot reduction, pickled mackerel with shaved baby fennel, mackerel skin crisps and baby beetroots, and a mackerel tartare, covered with a beetroot jelly and a pickled beetroot salad.

‘Absolutely delicious’. Marcus loved many elements of chefs dish but what really stood out was his ‘seasoning‘. He went say that he would be ‘delighted to play for that in any restaurant‘.

Monica thought the dish had great balance and textures, ‘Its a great plate, its clever and its tasty‘.

Gregg said ‘has their been a national lamb shortage‘, making a joke to the portion of the meat, but went to say that he liked most of the elements in the his dish.

Monica ‘liked‘ the cooking of the lamb, the flavours of the roasted celeriac but was a ‘little underdone in the middle‘ and couldn’t taste any tarragon in chefs mayonnaise.

Marcus said ‘theres a lot going on‘, and said the ‘lamb on the side is almost a garnish instead of the main event‘ and the ‘unfortunately‘ the ‘sauce doesn’t bring the dish together‘.

Gregg, Marcus and Monica all agreed that the 3 chefs going through to the quarter finals would be; Laurence, Simon & Oil.
Unfortunately saying bye and good luck for the future to Heritier, Susan & Chris.