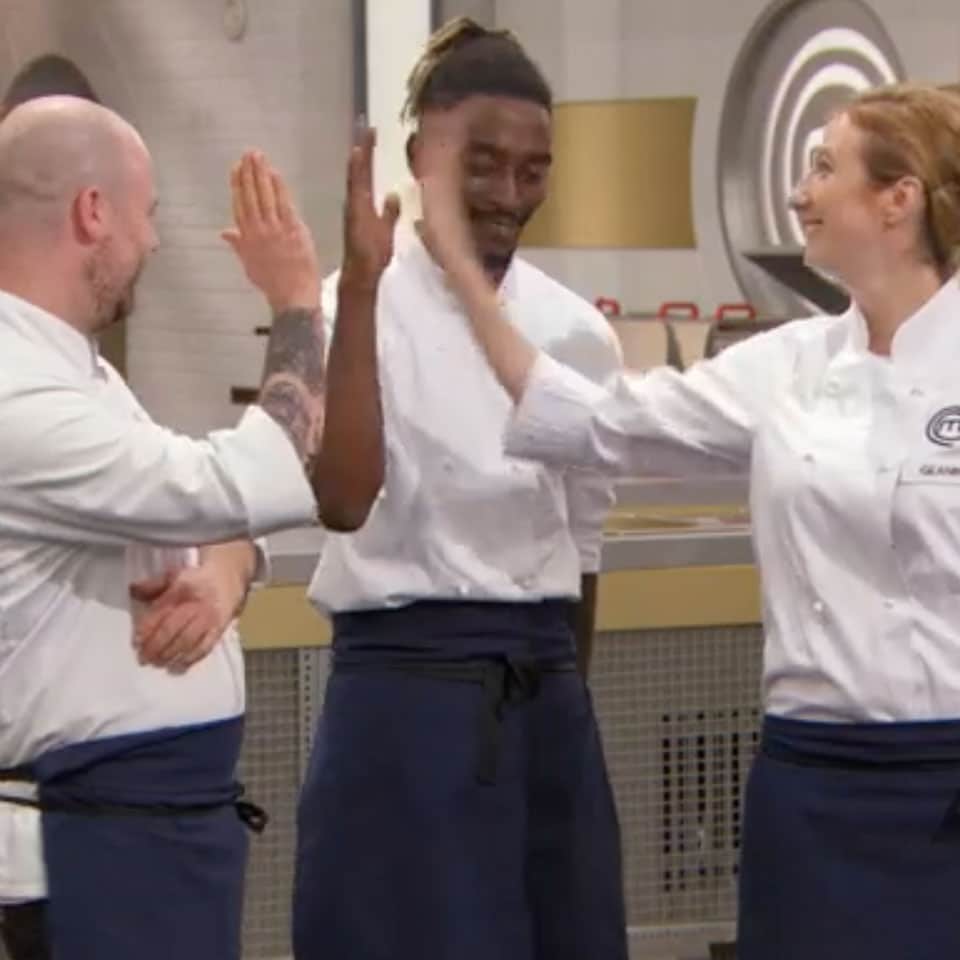 Week three of Masterchef: The Professionals, heats is over, and 48 contestants from around the country with a range of backgrounds have started to battle it out to be named the Culinary Professional Champion.

For the 2 next week, Tuesday’s and Wednesdays episodes will each have 6 contestants who will be competing and cooking through a variety of heats, quarter finals and knockouts until the ultimate winner is crowned. Who are then whittled down to 2 groups of 3 who will appear in the quarter finals on a Fridays episode.

In the first opening heat, each chef begins with the famous skills test. Under the watchful eye of all three judges, the first moments for any chef in this competition are crucial, as their knowledge, palate and experience are tested. The 3 chefs face a pasta test set by Monica. They have all have 20 minutes to roll, fill and shapes dish of agnolotti pasta.

The remaining 3 chefs face Monica’s skills test. Challenging them to cook chicken, bacon and mayonnaise sandwich. The simplicity of this dish belies the depth of skill that will be on display from the chefs.

Lets meet and see how the chefs got on, in episode seven …

Geanina, aged 32. Senior sous chef at a one rosette restaurant in London.

Marcus ‘loved’ the wild garlic pesto, and thought it brought ‘freshness’ to the dish, and also enjoyed the ‘very, very well made sauce’. Although the judge wasn’t keen on the lamb and said it was ‘on the tough side’.

Monica on the other side said the lamb was ‘wonderful’ and perfectly cooked to her liking. She was disappointed with bonbon, as she expected more ‘offal to come through’.

Wallace found the dish ‘perfectly delightful and delicious dish’ and was ‘very happy’ with the outcome.

Wallace unfortunately immediately found a shell in his food, which made him ‘nervous’. He said the sauce was ‘nice’ but ‘far from the sophistication and depth of a Goan curry’.

Wareing enjoyed the flavours and ‘good cookery on the monkfish’, but was hoping for more of a ‘richer, deeper flavour sauce.’

Monica was confused as to why Simon wanted to ‘deconstruct’ his Goan curry and said the concept of the dish was ‘lost in the beginning’.

Maxim, aged 31. A corporate chef in the city of London.

Marcus said the pork cheek was ‘the star of the plate‘ and the turbot was ‘perfectly cooked‘, and praised chef on he’s ‘very, very good start’ and this was his ‘second good plate of the day’.

Monica described the pork cheek as ‘divine, well glazed and falling off the bone’, and said it was ‘an excellent balance and tastes fantastic’.

Gregg couldn’t praise the pork cheek enough, by saying ‘That pork cheek is unctuous and its sticky and its matching in the stickiness of the sauce’, but didn’t want to see the turbot and pork cheek on the same plate.

Monica enjoyed the cooking of the sirloin and short rib, although she said ‘it wasn’t the best way to serve it’ and would of preferred bigger pieces.

Marcus said the celeriac was over seasoned, and demanded to give him ‘more sauce’, ‘take away the parsley’ and ‘loose the gel’. He thought the dish was ‘all over the place‘ and ‘didn’t work as a plate of food’.

Wallace enjoyed the steak, short rib, madeira and sauce, but was disappointed on how much sauce chef had plated up.

Gregg thought Williams dish was ‘wonderful, absolutely lovely’, minus the bacon, which he thought was ‘a little tough’.

Monica liked the way ‘the partridge has been cooked’, and the sauce didn’t deliver a ‘smack in the face’ orange, she had hoped for, but a ‘very clever plate of food’ overall.

Marcus ‘really did not think this dish was going to work at all’, but said the chef had delivered some really good flavours.

Luke, aged 30. Sous-chef at a seaside restaurant in Scarborough.

Marcus loved the presentation of the food, but was disappointed with his veloute and wasn’t ‘as strong in garlic‘ as he hoped and was missing flavour.

Gregg was very pleased with the different textures of the dish, but said the sauce wasn’t ‘packing a massive punch of flavour’.

Monica said it was ‘a nice plate of food’ which ‘tastes good’, but didn’t get the ‘strength of the flavours that should stand out.

Gregg, Marcus and Monica all agreed that the 3 chefs going through to the quarter finals would be; Maxim, William & Geanina.
Unfortunately saying bye and good luck for the future to John, Simon & Luke.

Lets meet and see how the chefs got on, in episode eight…

The first 3 chefs are asked to cook an elegant and tasty dish of broccoli – cooked three different ways set by Monica Galetti.

The remaining 3 chefs have to keep their calm, when Marcus asks them to make a dish of perfectly poached haddock on toast, accompanied by a polonaise sauce and topped with a fried egg.

Wareing was upset that it didn’t ‘taste as good as it looked’. The offal-infused croquette that all the judges were looking forward to, unfortunately Marcus couldn’t taste it and was ‘completely overtaken by potato’. ‘Theres a lot of things we should be tasting, but were not’.

Monica was ‘really upset’ about the croquette as that was the one thing she was looking forward to trying.

‘It looks right, but its disappointing in taste’ said Wallace and agreed there was ‘no seasoning’ in his croquette.

Wallace enjoyed the presentation and said ‘lovely, delicate looking plate’. He described the dish as ‘packing a punch in flavour’, saying that the matching salty flavours of the roe and the seaweed was a ‘delight’.

Monica ‘really enjoyed’ Dean’s dish and told Dean to ‘keep it going and a fantastic start’.

Marcus said the dish was fresh and light, with a great example of skill and technique, adding the delicate touch with the wasabi was ‘sensational’.

Carla, aged 25. Head chef at a country hotel restaurant in the Cotsworld.

Monica wasn’t happy with the sweetbreads, saying she would of liked them ‘a bit more golden and crisp on the outside’, she was ‘underwhelmed’ and she agreed chef had ‘great ingredients that worked well together’ but hadn’t ‘had the injection of love’ to bring out the best flavours.

Wareing wasn’t impressed with the lack of flavour in the cucumber, saying it had ‘no seasoning’ and felt that the ‘ingredients worked together in harmony’.

‘I don’t think there is big issues on this plate’, said Gregg, but thought there was a number of ‘small issues’ and together ‘adding up to a little bit of disappointment’.

After rushing towards the end of his preparation time, Mohan still managed to deliver a ‘soft and tender’ duck with a ‘divine’ black vinegar gel and dumplings that were ‘lovely and smooth inside’ according to Gregg.

Marcus loved the ‘delicious’ crispy skin and the ‘beautifully cooked’ pak choi, but said the chef had tried too hard and done ‘far too much for one plate of food’ and elements became lost.

Monica said she ‘absolutely loved the flavours coming out of this plate of food’ but agreed with Wareing and said there is ingredients on the plate that needs to be ‘refined’.

Chris, aged 30. Head chef at a country club and spa restaurant in Yorkshire.

Marcus didn’t like the presentation of Chris’s plate, but enjoyed the tastes of the dish, describing each element, but that the dish just lacked ‘refinement’.

Monica liked the flavours coming through from the oysters in the mayonnaise, but she would have liked more of the ‘burnt butter‘ flavour.

Gregg didn’t enjoy the tempura cockles and said they didn’t work, but said the flavours were ‘great’ while unfortunately ‘lacking presentation’.

Marcus was very happy that Gavin had ‘pulled it back’ and loved every element of his dish, and said that chef has really done himself ‘proud’.

Monica simply loved the dish and went on to that chef was, ‘back in the game’.

Wallace couldn’t fault the taste and said ‘there is nothing that would stop me wiping up every last bit of that with a bit of bread’.

Gregg, Marcus and Monica all agreed that the 3 chefs going through to the quarter finals would be; Dean, Mohan & Gavin
Unfortunately saying bye and good luck for the future to Ben, Carla & Chris.