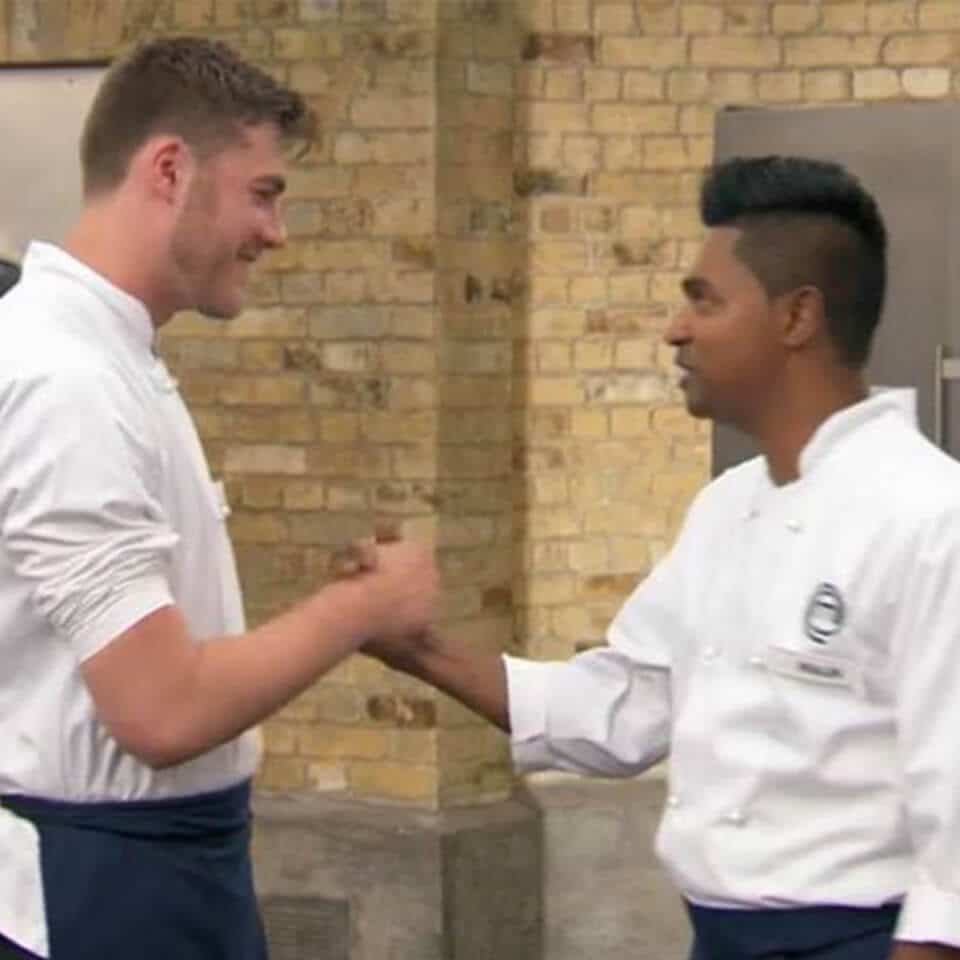 Its MasterChef: The Professionals knockout week and this is the first time all 12 chefs have cooked against each other.

In Tuesday’s episode, the 12 Chefs were faced with the Invention Test. Given 2 hours and 15 minutes, the chefs must cook a dish to impress all 3 judges; Monica Galetti, Marcus Wareing, and Gregg Wallace. The chefs are allowed 10 minutes to think up their dish and can choose ingredients from an extensive larder, including rabbit, goat, chicken, mussels, and a range of fruits and vegetables, herbs and spices.

Only 8 chefs from this round will make it through to the next. The remaining 4 chefs will then have the chance to cook off against each other for the remaining 2 places.

Let’s see how the chefs got on in episode 13…

Monica said the beef had been cooked beautifully and the sauce was heavy and rich. However, she was disappointed with the vegetables and said they were ‘bland’ and could’ve been more exciting.

Gregg also enjoyed elements of the dish and said the crepinette was brilliantly moist and well-seasoned.

Marcus was less complimentary. He said Andrew had presented a great wholesome dish, but it was ‘essentially meat and two veg’.

Malin, Works in a Gastro Pub in Pembrokeshire.

Monica was disappointed with Malin’s goat although said the flavours of the curry were ‘beautiful’.

Marcus was equally as disappointed and said the mango had been cut too small.

Gregg enjoyed Malin’s use of spices, but said the goat was too chewy.

Yann, Private Chef based in London.

Gregg was pleased with Yann’s fish cookery and complimented the puree, saying its flavours were a nice combination.

Marcus was thrilled with the dish. He said ‘everything about this dish I love’.

Monica commended Yann’s skills and said the fennel and elderflower consommé was delicious.

Marcus was disappointed with the potatoes, saying they weren’t cooked and didn’t have any flavour. Apart from the potatoes, Marcus enjoyed the cookery and the Parmesan flavours.

Monica was disappointed with Tom and said within the time he missed the opportunity to make ‘something special’.

Gregg was really impressed with Olivia’s dish. He said ‘I’m into this dish in a big way’; ‘absolutely lovely’.

Marcus was also pleased with the dish and said the garnishes had been cooked well. However, the dish lacked surprises and wouldn’t make Olivia stand out from the crowd.

Monica agreed with Marcus, saying the dish did lack surprises. Although, Monica was happy overall and said the dish showed great competency.

Steve, Head Chef at a Fine Dining Restaurant in London.

Marcus was underwhelmed and said the gurnard was ‘heavy and chewy’. He did however enjoy the tempura oyster and the ceviche.

Monica said the gurnard was ‘crying out for some citrus’ to cut through the marinade.

Gregg enjoyed the soda bread, but alike the other judges, he said the dish needed more gooseberry citrus to counteract the saltiness of the marinade.

Monica really liked the red wine sauce and said the pigeon was cooked well. Monica’s only critique was that there was too much spinach.

Gregg said ‘quite frankly, I’m a happy boy’, and was pleased with many elements of the dish.

Marcus was impressed with Freddie. He complimented the dish as well executed and well thought out, with great attention to detail.

Gregg was disappointed and said the gurnard was overcooked, and subsequently dry. The sweetness of other elements of the dish he did enjoy though.

Monica loved the tomato sauce but didn’t enjoy the swiss chard and courgette flower as she found it too much.

Marcus agreed with the other judges and found the dish a ‘bit confusing, bit complicated, a bit overthought’.

Monty, Junior Sous Chef at a One Michelin Star Restaurant in Solihull.

Gregg loved the fish and said its cookery and mousse was great. However, he found the pickling too sharp.

Monica was complimentary of the dish and overall enjoyed it.

Marcus was pleased with the execution of the dish although agreed with Gregg that the pickling was too strong.

Stu, Head chef at a fine dining restaurant in Birmingham.

Gregg really enjoyed the cooking of the meat, saying it had been done ‘really well’.

Marcus was happy with Stu’s work and said ‘you’ve been incredibly brave and skilful’.

Arbinder, Executive Chef for a wedding catering company in London.

Monica was pleased with the pithivier and said it worked well with the sauce. However, she found the quail breast to be overcooked.

Gregg was happy and said the dish had been well seasoned.

Marcus complimented Arbinder on some great vegetable cookery, but said the quail could’ve been executed better.

Marcus was thrilled and said everything was ‘beautifully cooked’, and the mushroom was a great surprise.

Gregg loved the leek and said the chicken was ‘technically really well cooked’.

Monica agreed and commended Exose for not over complicating the dish.

After the first round, the judges agreed that the chefs who had not yet secured a place in the top 8 were Malin, Steve, Tom and James.

This meant the chefs needed to pick themselves up and create a dish from the remaining ingredients to really impress the 3 judges. The chefs had 1 hour to deliver a dish that will hopefully win them a spot in the next round. After this round, 2 chefs will unfortunately be sent home.

Gregg was thrilled with Tom’s dish and said it was simple but tasted ‘fantastic’.

Marcus was also impressed with Tom and said ‘I like your ideas’.

Monica agreed with Gregg that the dish looked very simple, however, she said it worked very well and tasted delicious.

Marcus loved Malin’s dish and said there were some great curry flavours, and everything worked well together.

Gregg also loved Malin’s dish. He complimented every element and said it was ‘absolutely lovely’.

Monica was very complimentary and said she could’ve eaten another portion.

Gregg was happy with the fish and the vibrant herbs. Gregg did however say the dish looked messy.

Marcus was disappointed and said everything seems ‘broken up’.

Monica agreed and said there was ‘a lot going on’.

Monica wasn’t thrilled with James’s dish. She said the barley could’ve done with a little more cooking, and if the pigeon had been cooked more, the roasted flavour would’ve been more infused.

Gregg liked the turnip puree, but said the mushrooms were ‘odd’.

After careful consideration, the judges all decided that the chefs going through to join the other 8 chefs in the next round were Malin and Tom. Unfortunately saying goodbye and good luck for the future to Steve and James.